A diode is , known as the forward direction, when the anode of the diode has a higher positive potential than the cathode. In this state, the diode is said to be forward biased. If the polarity of the voltage is reversed, the diode is now reverse biased, and it will attempt to block current flow, within its rated limits.

Diodes are often used as rectifiers to convert alternating current into direct current. They may also be used to suppress voltage spikes or protect components that would be vulnerable to reversed voltage, and they have specialized applications in high-frequency circuits. 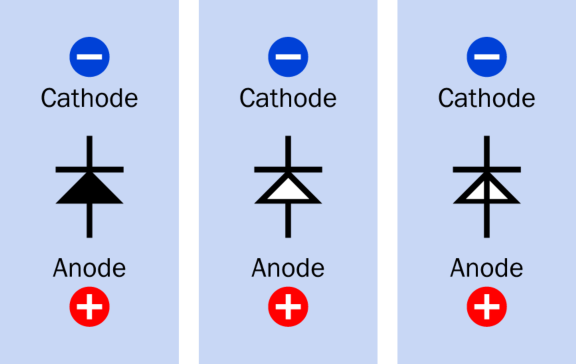 Figure 1: Commonly used schematic symbols for a generic diode. All the symbols are functionally identical. The direction of the arrow formed by the triangle indicates the direction of conventional current (from positive to negative) when the diode is forward-biased.

Figure 2: A typical diode and its circuit diagram symbol. A diode will only allow current to flow in one direction.

In the two circuits shown above, a typical diode is placed in series with a lamp and a battery. In the left-hand version, the positive terminal of the battery is connected to the diode's anode so that conventional current will flow in the direction of the arrow symbol (i.e. from the anode to the cathode). The properties of the diode mean that it will permit current to flow in this direction, and the lamp will be illuminated. In the right-hand version, the battery is connected the other way round, i.e. with its negative terminal connected to the diode's anode. The diode will not conduct current in this direction, so no current flows in the circuit and the lamp remains unlit.